Hey everyone! For all of my eastern America friends, I hope you’ve been enjoying the chilly weather! AND. HAPPY VALENTINE’S DAY. Is it cheesy? Yes. A commercial holiday? Um, doubly yes. However! I kinda, lowkey love Valentine’s Day?? For all of the couples out there – enjoy your cheesy day! For the single’s – HAPPY VALENTINE’S DAY. I WISH YOU THE BEST. SENDING YOU VIRTUAL COOKIES (and don’t be sad pls)

Anyways, I got the awesome opportunity to be a part of the blog tour for Jaye Elliot’s upcoming romance contemporary, No Chance Meeting. Which, of course, is perfect for Valentine’s Day!! It’s the first day of the tour, and I get to post! Which is both exciting and nervewracking 😬

I’m gonna share with you a deleted scene from the book, so I get to give alllll the secretsssss. But of course! It will include spoilers!

But before we go much further, here’s a lil about No Chance Meeting!

(byyyyy the wayyyy, here’s Jaye’s blog so you can find out even more deets or whatever 😜) 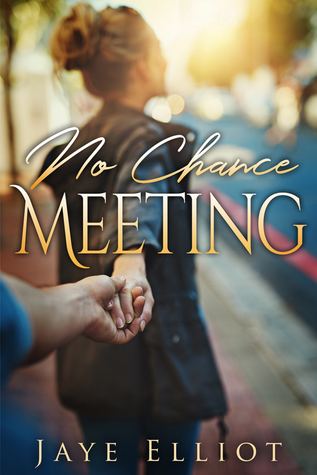 Alex Jennings is done with life. After losing her brother in Afghanistan, everything has collapsed
around her. Getting laid off from her day job and failing in her art career, she has nowhere left to
turn. She once had faith to believe that all things would work together for good, but that faith
died with her brother. Now she just wants the pain to end.
Riley Conrad served thirteen years in the military until three bullets sent him home. After a year
and a half of physical therapy and scraping together a living, all he wants is to live a simple life
and perhaps even open the coffee shop he dreams about. However, the weight of failing his
parents’ expectations doesn’t make it easy, and working as a bartender isn’t getting him
anywhere fast.
Could a “chance” meeting between Alex and Riley set them both on the path God always
intended?

Available now from Amazon, Barnes & Noble, iTunes, and more!
20% of all February sales will go to the Mighty Oaks Warrior Programs.

***SPOILER WARNING*** This is a scene I cut early on. Originally, I was going to have Riley’s friend, Bradley, come to the hospital. As much as I would have liked to have him actually appear in the story, it just complicated things and slowed down the pacing. I chose instead to have a scene early in the book where Bradley shares about his retirement with Riley over video chat. As you can see, I didn’t even leave this scene in long enough to give him a last name or give the scene a thorough edit.

Sometime later that afternoon, a nurse entered to room. She smiled warmly, and then focused her attention on Mr. and Mrs. Conrad who were sitting on the other side of Riley.

Alex straightened in her chair. “Bradley ( )?”

Alex looked at Riley’s parents. “Riley and Bradley served together.”

Mr. Conrad nodded and the nurse. “You can bring him in.”

A couple of minutes later, a tall man in jeans and a Carhart jacket stepped into the room. He had a brown hair with almost invisible streaks of gray at the temples. It was styled in a military cut, and his brown eyes were even darker than his hair. He was a handsome and strong looking man, yet had an air of kindness that Alex wasn’t surprised had drawn Riley into friendship and led him to Christ.

Alex got up and didn’t hesitate to hug Bradley. After all, he had played a large part in
helping Riley become the man she loved. Bradley hugged her back, not seeming weirded out at all by the fact that they’d never even met and had only spoken once.

When they parted, Bradley asked, “How is he?”

“About the same.” Alex tried not to sound too down about it. “Are you on leave?”

“Actually, I’ve been home for a few days. I was calling yesterday to let Riley know I’m home for good. This last tour was my last.”

Bradley nodded. “It’s time I devoted my attention to my family.”

Alex smiled. “He’ll be really glad to know you’re home safe.” She tried to remember exactly where Riley had said Bradley lived. Wisconsin, she thought. “Did you fly here?”

“Yes. After I called yesterday I booked a flight. I wanted to see him for myself, and hopefully be here when he wakes up. If I have to, I’ll get tickets for my family to join me.”

It could be a long wait, but Alex understood his need to be here. From the way Riley had always talked, Bradley was his best friend.

They got a chair for Bradley, and he joined them in sitting around Riley’s bed. He talked to Riley a bit, and then started telling Alex and Riley’s parents about their time together overseas. Bradley had lots of stories Alex had never heard. She especially loved hearing how Riley had gotten saved. It was good for his parents to hear too. Maybe it would help his father thinking more deeply about the subject after their conversation in the chapel.

And, of course, it wouldn’t be a blog tour without giveaways!! There are two for ya,

You can find the whole rest of the schedule for the tour here (please check out all of the other stops!). Also, come back later for the book review! And please, have a fantastic Valentine’s Day! 😘