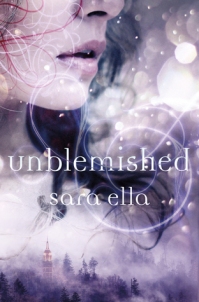 Eliyana has always recoiled from her own reflection in the mirror. But what if that were only one Reflection—one world? What if another world existed where her blemish could become her strength?

Eliyana is used to the shadows. With a hideous birthmark covering half her face, she just hopes to graduate high school unscathed. That is, until Joshua hops a fence and changes her perspective. No one, aside from her mother, has ever treated her as normal. Maybe even beautiful. Because of Joshua, Eliyana finally begins to believe she could be loved.

But one night her mother doesn’t come home, and that’s when everything gets weird.

Now Joshua is her new, and rather reluctant, legal Guardian. Add a hooded stalker and a Central Park battle to the mix and you’ve gone from weird to otherworldly.

Eliyana soon finds herself in a world much larger and more complicated than she’s ever known. A world enslaved by a powerful and vile man. And Eliyana holds the answer to defeating him. How can an ordinary girl, a blemished girl, become a savior when she can’t even save herself?

Guys, can we just take a minute to appreciate just HOW BEAUTIFUL that cover is?? And what about Eliyana?? They’re both just gorgeous!! Anyways, yes.

I had heard of this book through author Nadine Brandes, and then a month or so later, it popped up on my favorite reviewing sight. While it took me FOREVER to get to, I really enjoyed it!

Some of the characters I liked, other I didn’t. The plot had its ups and downs. Etc.

But it had a lovely message to it! That no matter who you are, or what you look like, you are special. While I, personally, have never really had problems with that, I know that a lot of people (girls, especially) struggle with that.

I also LOVED the first few chapters! (They were probably my favorites.) You’re still in Eliyana’s – our – world, which I didn’t think that I’d like. But I just did, though I don’t know if I can place it.

And something so cool is that all of the fantasy worlds are just like … altered New Yorks. So I almost feel as if were in New York … which is  cool.

As I said, some characters I liked, some I didn’t.

After those first few chapters, I found myself not really caring for El. Okay, like, I liked her and all, but I DEFINITELY still liked others more then her, do you understand (of course you do!)? So she was still a good character. Plus: she’s been a vegetarian for 10 years, so that’s AWESOME. Points El.

And the same for Ky. I liked him a lot better when he was more like your typical bad boy kind of guy. Then he had a complete personality switch, in my opinion. But I still liked him throughout.

Joshua was one of my favorites. He was just so … good at what he did. He had priorities and wasn’t all emotional and stuff, which was cool.

This plot was sort of like your typical “special snowflake” kind of story. But yet … it wasn’t. Yeah, sure, El was a SS, but it was … different. More like she was a face for the TRUE SS. Capisce?

For me, things were pretty predictable (but that’s NOT saying that I didn’t guess everything! There were a lot of backstabbing and stuff.), but not completely.

Also, I’m not sure if it’s just me, but the ending was kind of confusing. A little rushed, maybe. But then again, I was also reading it during a retreat, and people WOULD NOT SHUT UP. Ugh.

Lastly for this section, Sara Ella’s writing. I never understood what people said when someone had a “musical/lyrical” writing style. But This book takes that quite literally. El loves music, so that really bleeds through. It’s also told in the first-person and present tense, which was interesting.

I actually think that I already went over them all, but for those of you who just skip to the end, I’ll repeat them.

Indifference towards characters; predictable parts; confusing ending; special snowflake; love “v” is … hard for me; the ending was rushed and confusing; the like.

There is kissing and a decent helping of romantic interest. But a lot of talk of kissing is like making a deal. There are deaths and violence; nothing too descriptive. This is an allegory, so Christians and not alike can enjoy this.

So I definitely liked this. A very sweet message and all. I’d recommend this to teenager girls (even younger teens), and to some guys as well.

Thank you, BookLook Bloggers for the book! This is all my own thoughts and all … blah, blah, blah. Etc., etc., etc.

So, how’ve you all been? I’ve been fine. Is every USA person out there excited for Thanksgiving (FOOOOOD!!!)?? What’s YOUR favorite holiday? Comment below and let me know!