Hey guys! So, another re-post of a review that I’ve done on my other blog … but guys, I’m so tired, and the next review that I’m doing is gonna be kinda hard to do…

Anyways, so, this is Remember to Forget by Ashley Royer. Thanks for reading! 🙂 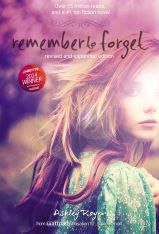 In Remember to Forget from Watty Award-winning author Ashley Royer, Levi has refused to speak since the tragic death of his girlfriend, Delia, and can’t seem to come out of his depression and hindering self-doubt. Desperate to make some positive change in Levi’s life, his mother sends him to live with his father in Maine. Though the idea of moving from Australia to America seems completely daunting, Levi passively accepts his fate, but once he lands faces personal struggles and self-doubt at the same time he and his dad battle through resentment and misunderstanding. And then, while at therapy, Levi meets Delilah, a girl who eerily reminds him of someone he lost.

This being a contemporary, I was actually surprised that I enjoyed this! Romance/contemporary/and MOST paranormal are my least favorite genres, and since this was two of those…. But I still liked it!

After reading a bit about the book, and some different reviews, I was expecting to not like Levi. That’s not true. Sure, in the beginning he was a bit annoying, but I just really liked him! And somehow connected with him?? I dunno.

I also liked Aiden and Caleb (even if they were VERY similar…) Lucy was also a highlight, because she reminded me a lot of my own three-year-old sister.

I liked Delia, and in one of the flashbacks, I didn’t cry, but it made me so sad! I mean, wow.

But the flashbacks with her were always a mixture of sadness and fun.

Well, the writing kind of annoyed me. While it wasn’t bad, there were still quite a number of errors, and it took me a bit to get into. There were also a few one-liners that I felt could’ve been left out entirely. Again, nothing atrocious, just, I would’ve been fine leaving them out. Happy, actually. There’s also a time that Delilah and Aiden took Levi to a part (why, Delilah, why?!), and I was kind of disappointed. I feel that it could’ve been left out entirely. Though nothing atrocious happened, I just … I don’t know.

And that leads me to Delilah. So, I immediately liked Delia (yes, there’s a difference between the two), even though she was already dead (spoiler! Oh, wait, not really.), but Delilah… She just really got on my nerves. I never liked her chapters (it switched 1st person POV between her and Levi), and I just didn’t like her. She just was SO ANNOYING TO ME. Gah! There was only one time that I liked her, and it was only for a few pages. And since I love the name Delilah, she kinda disappointed me.

Delia and Delilah seemed to be THE SAME people, and so did Caleb and Aiden! And that just really annoyed me!

And now, to Levi’s depression/anxiety/etc. I feel that there were different times that Ashley did a good job with it, and others, not as much. And when a certain thing happened, I was a little disappointed in Levi.

So overall, this just wasn’t my book. But it was still good, and I actually enjoyed it. I wouldn’t recommend this to anyone under … fifteen? Fourteen? And also, I’m not sure if I’d recommend this, but, yeah. I liked it better when I was reading it, but after a week or so and some contemplation on the book, my views on it kinda went down.

Hey guys! So, sorry for those of you who follow my blog and had to read this twice (…. or just skipped down to my questions of the day …), but, yeah. Anyways, yes, the questions: Since Disney movies are so popular, which one(s) is(are) your favorite(s)??? Mine are Brother Bear, Beauty and the Beast, and The Force Awakens. 😀 Any Star Wars fans out there??? Talk to ya in the comments!