Heeeey everyone! I guess that’s all I’m going to say today. Yep, that’s it. Nothing else. Uh, huh.

Oh, how about, today is Wednesday? Yes, well, I didn’t have internet yesterday and I wasn’t on top of reviews..

I’m reviewing a book by my friend Kaitlyn Dean, and it’s called The Witches’ Sleep. People, this book is awesome! (And, I love the cover!! 😉 ) 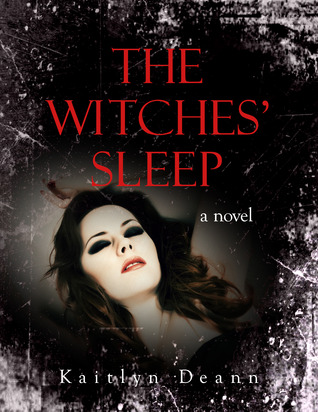 At only seventeen, Ella Barnes is shot and killed for an unknown reason. She is shocked when she wakes up in a different world, a world of witches. Ella has to learn to adapt to a new body, new life and new world, surrounded by new people. As Ella gets to know Raena, the world of the witches and its people, she realizes they aren’t the perfect creatures they believe themselves to be, and she’s not the type of person to stand around and twiddle her thumbs. Will Ella succeed in changing the mindset of the people? Or will she be doomed to die another cold and tragic death because of her rebellion?

So I have an (awesome!) writing group on GR, and one of the main people who run it (I’m a mod! Yay!) is Miss Kaitlyn Deann. One of the other mods (for you non-Goodreads people, that’s who(s[?]) runs a group. Anyways. Yes. But, one of the other mods loves The Witches’ Sleep, and it kinda got me wanting to read it. Then. And then. Kaitlyn had a giveaway on her blog for two or three of this book IN PAPERBACK (yes!!!!!) (though I don’t remember why….), and I actually won!! Yep!

So, of course, I just had to read it! And, I mean, look at that cover! It’s my favorite shade of red!

Now, this is a paranormal book – which was part of the reason why I was hesitant to read it – but it actually wasn’t bad in that sense! I really didn’t feel like I was reading a paranormal! Like, it’s a world of witches (guys and girls are apparently called that, there), who are basically humans, just perfect in looks and for each of the different eye colors – except brown – you have a “power” like persuasion or strength and you live super duper long.

And in this book, there was a lot of Ella trying to free slaves, which was awesome! Because all the were-creatures need saved!!! And it was cool to read about all of the slaves trying to free themselves, and how all of them and Ella were faced with resistance.

I really enjoyed Kaitlyn’s writing! Since this was her debut novel, I wasn’t sure, but I was pleasantly surprised! For the most part, things flowed pretty well along the whole book (minus a few parts)!

The plot was mostly Ella confused and trying to get her bearings in a strange new world, and pick up where she left off (her memory was basically wiped) and freeing the world – Raena – of slaves. It was pretty cool! 😀

I liked Ella, I really did. I mean, she did have her times where I was so annoyed at her and wanted to slap her straight, but, that’s normal, isn’t it????

Daedrian. Well…. So, at first I didn’t like him because that was ALL ELLA EVER THOUGHT/TALKED/EVERYTHING about! And, honestly, that annoyed me. But after meeting him (spoilers???), I was kinda off and on with him, WHICH I FELT REALLY BAD ABOUT. AHHH. AH. Ah. Ahem.

Then, of course, you have Sea-Anna and Tuck. Both of them are were-tigers (basically werewolves, just, tigers). So, I kept thinking that Tuck was in his forties and that Sea-Anna was maybe in her lower teens (you’ll see why I thought that for both of them if you read the book), and kept having to get myself straight. But I loved both of them. 🙂

And you have Clap and Songs. Welllllll…… Clap was pretty awesome, if I do say so myself. But Songs … she was trying. She really was. But, maybe a little too hard? Which gets you kind of annoyed at her. But she’s still pretty cool. (Though, that’s how she’s suppose to be. So, yeah.)

As I said, I have a sorta like-hate relationship with Daedrian. Sometimes the writing didn’t flow perfectly. Stuff like that.

So I was very pleasantly surprised with this book, and I’m very excited to try and get the next book at some point to (obviously) read!

There were some things that I didn’t like/felt uncomfortable, but overall, it was great!!

For romance-wise: Yes, guys, there is some stuff. Basically just kissing and hugging. Actually, yeah, that’s all there is.

And violence. Well, this isn’t a violent book, but there was some. Like there was a fight to the death, so there were a lot of nicks and bruises then, and also people being rescued from/burned by a fire, and lastly, there was an arrow through the neck that was described enough that it made me feel a little queasy (‘specially since I wasn’t expecting it).

And there is slavery, so you have that.

Yep, there you go!

And if your unsure about reading this because it’s a paranormal, don’t be! Let me put your mind at ease: it’s not witch-y/paranormal-y at all! So if you don’t like the genre (like me. Mostly.), then you’d still be fine! 😉

I’d definitely recommend this to teenagers! Maybe like fourteen/fifteen and up?

Now for the big question …. when choosing which strawberry to eat (or if you live in Antarctica and/or dreadfully allergic: any other fruit/veggie will do!), do you go for the biggest? Or the ripest? (Also: is it weird that I eat the strawberry’s stem, too? Apparently everyone else thinks that it is……

2 thoughts on “The Witches’ Sleep by Kaitlyn Deann”